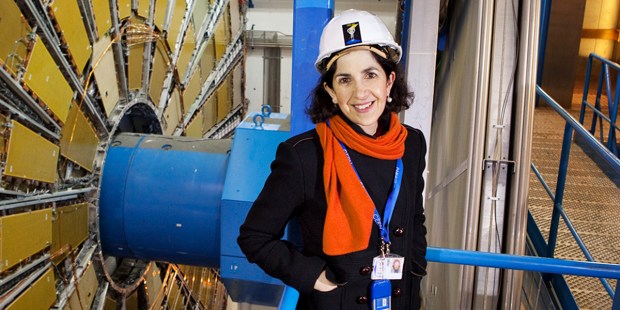 Fabiola Gianotti’s life and work for the past several years have had a lot to do with collisions. But it’s the kind of collision that yields good things.

If her work on a Vatican commission entails any sort of conflict with other members, such “collisions” could yield similarly good fruit.

Pope Francis on Tuesday appointed Gianotti, the director-general of the European Organization for Nuclear Research (CERN), to the Pontifical Academy of Sciences. The Italian experimental particle physicist is perhaps best known for having overseen the work that led to the discovery of what many call the “God particle.”

That was in 2012, when Gianotti led Atlas, one of several experiments being conducted at the the Large Hadron Collider (LHC). The world’s largest particle accelerator, a 17-mile circular tunnel straddling the French-Swiss border, is used to smash protons into each other, traveling at near speed of light, to see what they are made of.

First predicted in the 1960s by British particle physicist Peter Higgs, the Higgs boson particle is, in the words of the Guardian, the “elusive subatomic particle that gives mass to the basic building blocks of nature.”

“Fabiola Gianotti is a particle physicist working at high-energy accelerators,” said the website of the Pontifical Academy of Sciences. “In her scientific career, she has made significant contributions to several experiments at CERN, including UA2 at the proton-antiproton collider (SpbarpS), ALEPH at the Large Electron-Positron collider (LEP) and ATLAS at the Large Hadron Collider (LHC). She worked on several aspects of these experiments, including detector R&D and construction, software development and data analysis.”

In 2014, the Guardian characterized Gianotti as something of a Renaissance woman:

Gianotti initially decided to study philosophy at university because it asked big questions, but in the end changed to physics because it was more likely to produce answers. This combination of artistic and scientific influences has left her with three passions in life: music, cooking and physics. “All three follow very precise rules,” she says. “Musical harmony is based on physical principles while in cooking, ingredients must be weighed out with precision. At the same time, you have to be able to invent because if one follows the same recipe all the time, you never create anything new.”

Gianotti was reared a Catholic, said the Guardian. “Her only comment on the relationship between science and the Church is to insist that physics can neither prove nor disprove the existence of God,” the newspaper said.

Gianotti joins Academy members such as Francis Collins, director of the U.S. National Institutes of Health. Past members include Guglielmo Marconi, Max Planck, and Niels Bohr.

According to its website, the work of the Pontifical Academy of Sciences comprises six major areas: fundamental science; science and technology of global problems; science for the problems of the developing world; scientific policy; bioethics, and epistemology.